…..all the historic issues of Radical Software freely available to everyone

PDF files, opened with the popular application Adobe Acrobat Reader, can be downloaded and stored on a recipient’s hard drive for later use. They can be enlarged, reduced, and zoomed in on. The recipient can not only read the text and view the graphics, but also view the original page layout.

The wonderful on-site search engine devised by the Langlois Foundation will allow scholars and other readers to follow keywords through the many articles and essays that appeared in Radical Software over the years of its publication.

We believe that putting Radical Software on the Internet makes available an important primary source on the origins of an aspect of video art not often covered, and on the intent of those who first saw video as a tool for change.

Republishing Radical Software on line helps make clear the rationale behind much early video, and the aspirations of those who devoted their time to producing, writing, and designing for Radical Software during that important era. 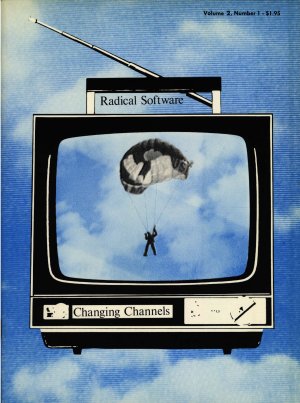