What is Dignity Nation?
Dignity Nation is a community of people who have joined Global Dignity Project by signing the Dignity Principles. The idea of Dignity Nation is to create a place for ongoing conversation with and between the people about the possible means in turning the world into more Dignified place to live. Also the purpose is to show how important the values of Dignity are and that they are commonly shared by all people in all cultures. Join the ever growing movement, give your voice also a face and be part of the change!

Dignity Nation is the movement of the 21st century. It uses the power of the web to bring like minded people into one ongoing virtual demonstration for Dignity!

Who are behind the Global Dignity Project?
The Dignity Project is an autonomous, non-profit and non-partisan project linked to the 2020 process of the World Economic Forum where young global leaders from politics, business, academia, and civil society have joined together to work for the improvement of the state of the world and people (the group ranges from Presidents of African countries to socially conscientious business leaders such as the founders of Google, from leaders of the most influential civil society movements like Make Poverty History to leading academics and cultural figures of our time; for more information, see www.younggloballeaders.org).

The co-founders of the Dignity Project are Crown Prince Haakon of Norway, John Bryant from Operation HOPE, and Professor Pekka Himanen, University of Art & Design Helsinki and Visiting Professor at Oxford University.

Who are the people behind the Dignity Nation?
The concept of Dignity Nation was created by Kalle Määttä in a Media Lab course in the University of Art & Design Helsinki. The implementation of the website was done by Wesa Aapro, Jussi Rytkönen, Kosti Rytkönen and Mikko Luotonen.

What is the purpose of the Global Dignity Project?
The mission of the Dignity Project is to implement globally the universal right of every human being to lead a dignified life. This is a paradigm shift in thinking about our global challenges, a new language and a mindset to approach issues of poverty, peace, and progress.

Largely, we know the main problems of global development. The issue is to be able to phrase them in a language and with metaphors that inspire action. The formulation of this new language is the task of the Dignity Project. It is formulating a globally shared dream to unite the development, joining the forces of public, private, and citizen sectors.

What is the purpose of Dignity Nation?
The Dignity Nations goal is to gather the people supporting the ideas of Global Dignity Project into a united community that is willing to give their voice also a face. The purpose is to show just how important the values of Dignity are and that they are commonly shared by all people in all cultures. With the power of people the Dignity Nation will posses the power and means how to take action in making the world more Dignified place.

Dignity principles:
1. Every human being has a right to lead a dignified life.
2. A dignified life means an opportunity to fulfill one’s potential, which is based on having a human level of health care, education, income and security.
3. Dignity means having the freedom to make decisions on one’s life and to be met with respect for this right.
4. Dignity should be the basic guiding principle for all actions.
5. Ultimately, our own dignity is interdependent with the dignity of others. 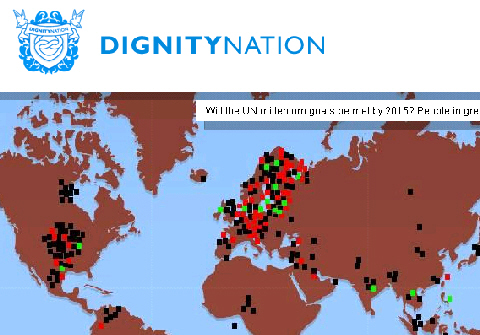