In 1950, the Columbia University Music Department requisitioned a tape recorder to use in teaching and for recording concerts. In 1951, the first tape recorder arrived, an Ampex 400, and Vladimir Ussachevsky, then a junior faculty member, was assigned a job that no one else wanted: the care of the tape recorder. This job was to have important consequences for Ussachevsky and the medium he developed. Electronic music was born.
Over the next ten years, Ussachevsky and his collaborators established the Columbia-Princeton Electronic Music Center, which Ussachevsky directed for twenty years. It was the first large electronic music center in the United States, thanks to the path-breaking support of the Rockefeller Foundation and encouragement from two of the country’s leading universities. The Center became one of the best-known and most prolific sources of electronic music in the world. All of the music on this historic reissue (originally released on CRI) is the result of the pioneering work of the Center and its composers.
The guest composers and Columbia-associated composers who have produced pieces at the Center include Bülent Arel, Luciano Berio, Mario Davidovsky, Jacob Druckman, Arthur Kreiger, Daria Semegen, Pril Smiley, and Edgard Varèse. Ussachevsky’s own students at the Center included Jon Appleton, Wendy Carlos, Charles Dodge, Robert Moog, Alice Shields, Harvey Sollberger, and Charles Wuorinen. Of the seven composers most closely associated with the Center from its early years, six are present on this disc.
Vladimir Ussachevsky: Sonic Contours (1952), Piece for Tape Recorder (1956), Computer Piece No. 1 (1968), Two Sketches for a Computer Piece (1971); Otto Luening: Low Speed (1952), Invention in Twelve Notes (1952), Fantasy in Space (1952), Moonflight (1968); Otto Luening–Vladimir Ussachevsky, Incantation (1953); Pril Smiley: Kolyosa (1970); Bülent Arel: Stereo Electronic Music No. 2 (1970); Mario Davidovsky: Synchronisms No. 5 (1969); Alice Shields: The Transformation of Ani (1970) 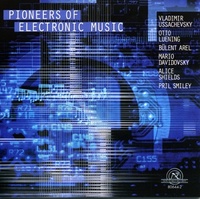