LITERAL:
Greyworld is a group of artists who create urban art. Our work finds expression through the mediums of installation, sculpture and multiples. Our primary objective is to create public art that involves the human in an urban context. Greyworlds installations are preferably situated in the urban arena, allowing visitors, pedestrians and passers by to become part of the creative process in spaces that permit the widest forms of interaction. Visitors become actively part of the installation itself, the work not being complete without them. For the most part, these installations are often displayed in the ill defined areas of the city, in the grey areas between the functional, well defined zones: the living, the working and leisure spaces. These works would seek to “short circuit” both the environmental and social expectations supplied by the surrounding urban environment, and provide a creative means of expression in the banal and ignored zones of the urban surround.These works create spaces which offer the passers by an opportunity to join an unexpected “community of presence”, to leave a trail simply by being there or passing through.

The Source
On Tuesday, 27th July, Her Majesty Queen Elizabeth unveilled
greyworld’s latest installation at the new London Stock Exchange, in the heart of the city of London. The Source, a eight storey high kinetic sculpture, is the new symbol for the Stock Exchange. Every morning, millions of viewers around the world will watch the installation come to life, signifying the opening of the London Markets. The Source is formed from a grid of cables arranged in a square, 162 cables in all, reaching eight stories to the glass roof. Nine spheres are mounted on each cable and are free to move independently up and down its length. In essence the spheres act like animated pixels, able to model any shape in three dimensions – a fluid, dynamic, three dimensional television… more here 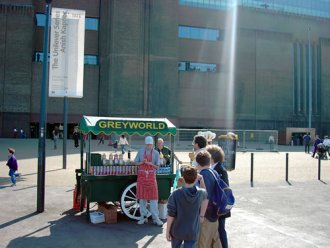