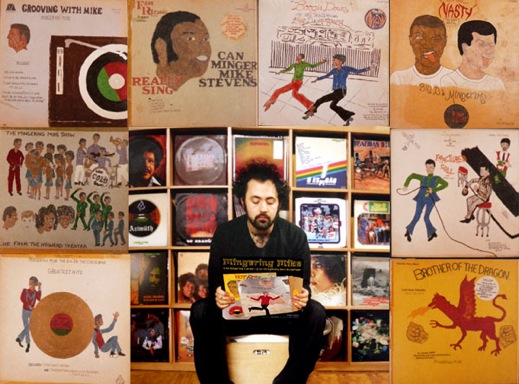 Perhaps pop music, like politics, is at its most POPular when it dishonestly tells you what you want to hear, but I still don’t know what I want to hear, which is why I still love discovering pop music. In the era of Autotune the pop music politicians are desperately trying to sell us what they want us to hear as Harry Partch oscillates wildly in his grave… The military vocoder wasn’t designed to be the bearer of good news, it was designed to keep secrets… Seek out Major Tompkins (Dave), a man that literally speaks his mind.
So… the original vinyl records I’ve recycled to make this collage come from a wide range of countries from Alaska to Zurich and taking random stops in Bombay, Brussels, Lahore, Manchester, Melbourne, Moscow, Paris and Warsaw along the way, but regardless of cultural background, social politics or language these records still manage to communicate a universal language of eccentric pop/art re-contextualised for a sceptical generation where someone’s word potentially means less and less each day and creative action speaks louder than. +